A New Kind of Mobile Device

“With a PDA, you accept a lot of compromises”, said Joshua Shane of OQO. “With these computers there are no compromises. You have a real computer in your hand.” 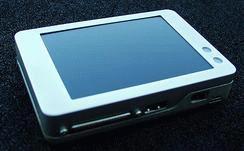 In its current state, the OQO has 802.11 and wireless Bluetooth networking built in and features Firewire, USB, audio out and proprietary OQO docking ports for the addition of keyboards, mice and other peripherals. The screen is bright, and although the machine was running a full version of Windows XP when I saw it at PC Expo this past week, Shane said the OQO eventually will be outfitted with Linux. “It’s a PC”, he said. “You can get Linux to run on it easily.”

The OQO is expected to ship by the end of this year. The product team working on the OQO includes Transmeta co-founder Colin Hunter, as well as usability and manufacturing experts formerly employed at Dell and Apple.

The Antelope MCC is an IBM licensee (they have a ten-year licensing agreement for IBM’s Meta Pad) producing a “black box” that acts as a mobile, desktop and tablet computer all in one. The core is a small hard-shell case with ports for various peripherals, including touchscreens and docking stands that allow the core to act as a fully functional PC. 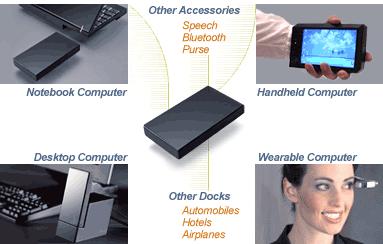 Like the OQO, the MCC contains up to 20GB in hard drive space and 256MB of memory on top of a 500MHz-1GHz Crusoe chip. Various modules are planned, including wearable systems for mobile computing.

John D. Biggs is a writer and consultant living in Brooklyn, New York.